If you are looking for a perfect android-compatible puzzle game, you might want to check out Toon Blast. Loaded with some incredible features, this game is extraordinary, to say the least! The gameplay is amazing, and the puzzles get challenging at every level, keeping you on the edge of your seat. Another reason we laud this game is that it is created by the same makers of Toy Blast. The gameplay is unique, and the fun doesn't seem to end. On top of all that, you get to take a peek into the adventurous world of cartoons starring some of the best characters like Bruno Bear and Cooper Cat among others. The levels are whacky, and the game is extremely interesting at all points.
One of the biggest highlights of the game is probably the incredible gameplay. Even though we don't typically expect much from puzzle games, this one goes above and beyond your expectations by loading up with every feature you always dreamt of. The best part is that, unlike common digital board games, this one doesn't get boring at any point. Because you are welcomed with a series of challenges at every level, playing the game becomes double the fun and excitement.
The next thing you would love is the characters of the game. As we mentioned already, Toon Blast comes with a plethora of diverse characters who make the game even more exciting and well-rounded. Unlike other games, you will also get a basic overview of every character even before you meet them. This way you are prepared for what’s coming up next and what to expect from the characters.
The final and the biggest highlight of this game are the unique levels that you are required to complete. For instance, in the first couple of levels, you are expected to blast a bunch of cubes to get through. Additionally, you also need to dodge the not-so-nice characters and make it through the game without falling for their trips or traps.
You can also create combos to complete the levels. Depending on how many blocks your combo has, it is extremely or not so powerful. The goal is to create powerful combos so that you get through the levels with minimum effort. You would also love this game if you enjoyed pair matching because Toon Blast gives you plenty of opportunity for that. 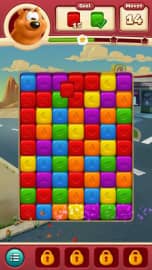 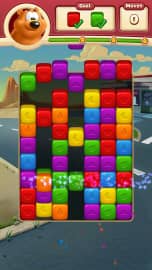 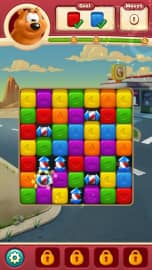 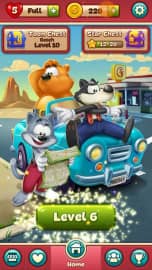 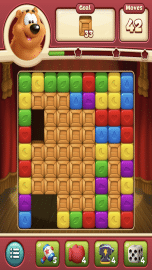 At this point, you are probably wondering how to play Toon Blast. But fret not for we have listed out a series of steps that will help you start and eventually get through the game.
Step one
As a first step, you need to understand the premise of the game and Toon Blast, like many other puzzle games, is all about completing the levels that come through. Having said that, the game isn't the same as other puzzle and trivia games because it comes with some pre-defined chapters that collect a bunch of levels. You can expect one chapter to contain at least 20 levels and you would need to complete all those levels to complete the final chapter. The theme in these chapters will be different, but the levels of one chapter might share the theme ranging from desert action to deep jungle safaris, and everything in between. So, before you hit the play button, make sure you thoroughly understand what the game is and how it works.
Step Two
As you play the game, you will find a bunch of helpful features geared to assist players in completing the levels. One such feature would be the awesome boosters that you can use before starting a level or in-game to complete the puzzle. As you would probably guess, if you start the game with a pre-game booster, you will have an added advantage ahead of your competitors because you already have the features to get you started. It might help you create stronger pairs and bonds in the puzzle or clash through levels in a breeze! The same applies to in-game boosters that usually appear when you are about to complete a level. If the level seems difficult, you might want to use these in-game boosters to sail through with minimal hassle.
Step Three
Once you play the game for a while and complete a bunch of levels, you will realize that the obstacles are getting even more difficult. At times, you won't get a perfect set of cubes that will pair up right away like the lower levels. In some cases, the cubes might almost seem unmatchable, especially at the higher levels. The solution? Make stronger and longer matches that contain 3+ units. The longer your match is, the stronger it gets, and will help you come up with the best score.
Step Four
Don’t shy away from powering up your pieces and ending up with Disco Balls and rockets. They will only help you get better at the game. You can activate any of the mentioned powerups to enjoy an added advantage in the game. But you get even luckier when you team up the powerups to create stronger matches. This goes a long way in boosting your score and weeding out the challenges you might otherwise encounter.
Well, that was all about the Toon Blast game. Because we have now listed out both the description and some useful nuggets on how to play the game, you will have an easier time from here on. The game will get even more interesting at every new level and the characters will only keep you more hooked to the screen. Unlike other fancy puzzle games or the more basic variants, Toon Blast is also easy to play and navigate around. You can start playing the game from scratch with minimum assistance and every level will be even more fun than the last one. So don't wait any longer, go and start playing today and have an exciting board game adventure with some of the wackiest characters around.