Talking Tom is the title character and also the primary character of Talking Tom and Friends. Tom was the first character among Talking Friends developed by Outfit7. The character was first introduced to the public in July 2010. The sequel came out a year later in 2011.
It’s a well known fact that Tom is a gray Tabby cat endowed with striped tail, long whiskers, cute and pink insides of the ears and beautiful white eyebrows. Thankfully, he has got a red shirt with a thumbs up pattern on it and a pair of jeans with a green belt and sneakers.
The plot of Talking Tom Gold Run is that the player is robbed. Now, you have to explore this never-ending runner for helping Angela and Talking Tom to chase the robber for procuring back the gold. You can discover new worlds along with a host of running styles. After all, running is the only thing that pays off. Some of the main features of Talking Tom Gold run include:
Never-ending fun and thrilling: The fun never ceases to end with endless racing and running.
Mission and rewards: You can win missions for receiving cool rewards
Create amazing homes: With the gold bars you have accumulated, you may build wonderful homes for Talking Tom and Friends.
Run with special characters: You can boost your running speed and perform cool tricks with the special characters of the game.
Talking Tom Gold Run is a cool game that will engage you in running and jumping while experiencing a major adrenaline rush within seconds. Once you chase and catch the robber who has stolen the gold and unlock new worlds. Also, the gold bars will help you build and upgrade amazing homes for Talking Tom and Friends. There are loads of worlds in the game to welcome you including Tom’s Home, Hank's Highway, Ginger’s Forest Fun, Angela's Boulevard, Tom’s Snow Ride, Ginger’s Farm, and Ben’s Adventure among others.
The best thing about the game is that Roy Rakoon makes his appearance in this fantastic game. The Chinese version of the game has several differences in the racing competition mode. This version is made by Jinke along with Outfit7. Talking Tom Gold Run received 34 million uses within 30 days of its launch. 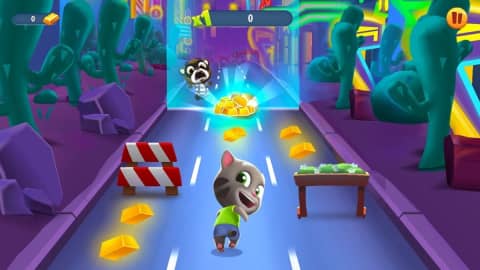 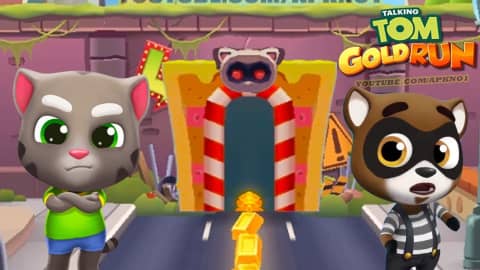 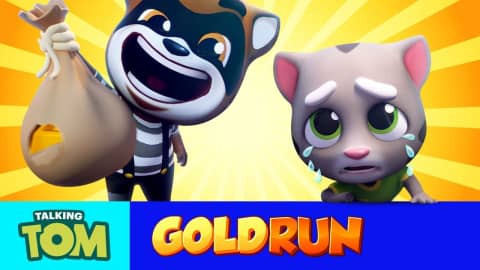 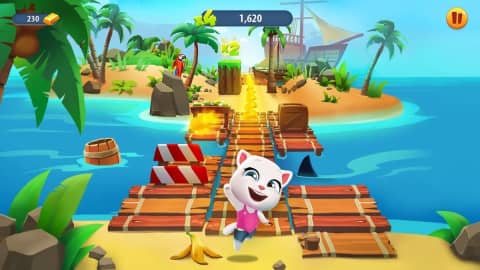 Talking Tom Gold Run is a great adventure game built around sound technology. It is compatible on both iOS and Android platforms. The game also allows you to collaborate with other players and play online. Most of the players are teenagers and adolescents who enjoy the various levels of difficulties. Let’s see how to play this thrilling game:
The first step is to search for the game in the Play Store.You can find it in Apple iOS, Windows, and Android phones. Once the game has been added successfully, you will be transported into the world of "Talking Tom".There you have to run endlessly in a predetermined pattern with various characters.
While you run, you have to shout “STOP THIEF!”. That’s because you have just pick pocketed. Once you catch the thief you can get back your precious metal.
As the metal is again under your charge, you can use it for unlocking a new world and building homes for Tom and Angela. The most rewarding aspect of the game is that you can use the precious gold for upgrading all the buildings and even buying vaults.
The gold you have grabbed from the antagonist Raccoon allows you to unlock a new world and change your running styles while snatching some desired energy boosts on the run.
While you run, you will also have access to boosters that allow you to get additional gold bars and double your score tallies. You won’t even have to face any obstacles as you can fly over them straight.
With every step you take while running, you will see your score also surging up. You will encounter checkpoints that give you access to bonus and rewards.
Even if you get crashed into any obstacle, you will have the choice to keep on running. In that case, you have to pay with dynamite.
Wouldn’t it be great if you could have some players chase the robbers with you? You can recover gold bullion while constructing the home of your Tom’s dreams! There are a lot of differences and magnificent features in the different worlds you see. It also has certain elements of tycoon game and you can gather a lot of wealth as you play on.
As you have understood how to play Talking Tom Gold Run, it’s worthwhile to find some intriguing details about the game. The game reached the first position in the category of games across the 137 nations. Needless to say, it literally took the blood and sweat of the team members to conceive, create, and develop the game.
A staff of 80 adept developers have toiled for over 8 months for transforming this innovative game from a preliminary sketch to a thrilling game online. As the game was first conceptualized, the developers had certain things in mind. It was meant to feature a star from the group of Talking Tom and Friends. Also, it was supposed to be an endless runner game. They aspired to become the best seller and thus, it also incorporated a level of building system.
It goes without saying that when a smartphone game wishes to be engaging, it needs to have a lot of fun and some level of humor. This perfect blend of traits is an unfailing ingredient to increase its appeal to people of all ages. It was developed along with the art and every team fed each other at the same time. Any avid game developer takes pride in learning, growing and incorporating the lessons in their work. And you can easily experience this when you play Talking Tom Gold Run. So what are you waiting for? Start playing today and enjoy an endless run!