Zombieville USA 2 is a popular action game designed and developed by Mika Mobile. You can play this game on your Android, Windows and PC platforms. So. Zombie fans, your time to celebrate has come again and it’s bigger and better than the prequel. All you have to do is to assume the role you are going to play in this definitive zombie shooting title. The game has better graphics and you will enjoy the gameplay like the previous one with some major improvements.
Select your choicest character and take complete control of the action, decide the looks and give the right weapon for every single mission. You can play the game by yourself or with your companion! The game doesn’t come with any specific instructions and you can pick what appeals to you and start playing.
You can destroy the complete herd of zombies with all the ammunition you have got in an attempt of saving but never waste. You can enjoy the flawlessly designed animations while showing the ugly living dead their place. The game is suitable for children to play but parents need to know that it’s a shooter game with fascinating cartoon graphics along with some animated blood. The players have to take on the waves of zombies and destroy them with their arsenal of ammunition readily available.
The blood is bright but not gory, thanks to the stupendous cartoon graphics. It’s worth noting that there are enough weapons that you can upgrade by purchasing. The game doesn’t come with any in-app purchases for exchanging real-world cash for the currency in the game.
Released on October 27th, 2011 Zombieville USA 2 got the final update on June 24th, 2016. Regardless of whether you are an avid fan of casual, action, or entertainment games, you are going to find this one interesting and engaging. Some of the major features of Zombieville USA 2 include:
Simple arcade action that involves pick-and-play. Players can fight tons of enemies and make maximum use of ammunition to increase their score.
Tons of content that can be unlocked while you play on. These include skills, weapons, new characters, and hordes of upgrades.
Stylish and fluid animation properly optimized for retina display.
Complete Game Center Integration that includes leaderboards and achievements.
iCloud support lets your progress in the game to sync with all your devices on its own.
Wireless co-operative multiplayer but it requires an iPhone or iPod Touch 3rd Generation iPad to use this feature.
The multiplayer feature allows easy connectivity to the closest master serving that helps in improving latency for users outside the US.
For those searching for a plot-driven zombie game, Zombieville USA 2 is a brilliant choice. The description of the game shows that throughout there will be bloodshed but it’s more of a cartoon rather than gory, which makes it almost adorable. There is no particular way of playing the game and you can rush into the battle with guns blazing and run away from zombies after you.
The cooperative play mode of the game allows it to connect over Wi-Fi or Bluetooth which turns it into a social application. The best part is that the developers have skillfully bypassed the route of in-app purchases which ensures that the players need to earn the necessary upgrades by playing. 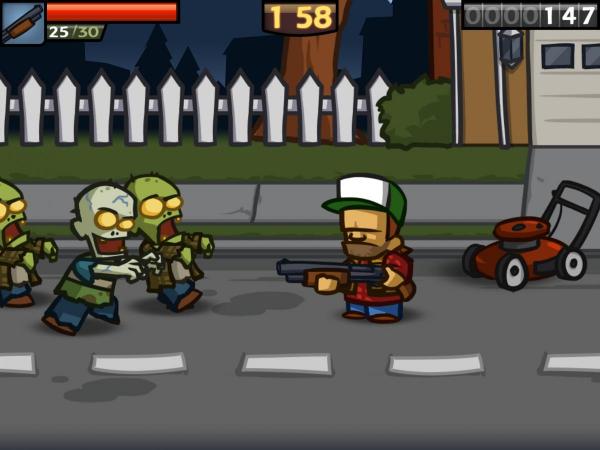 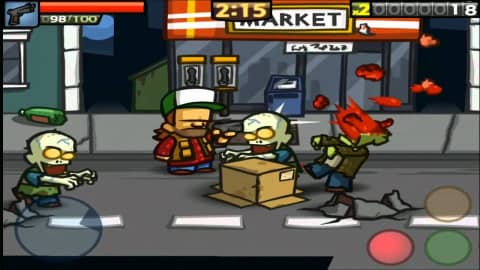 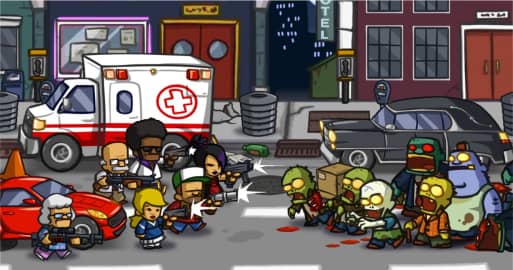 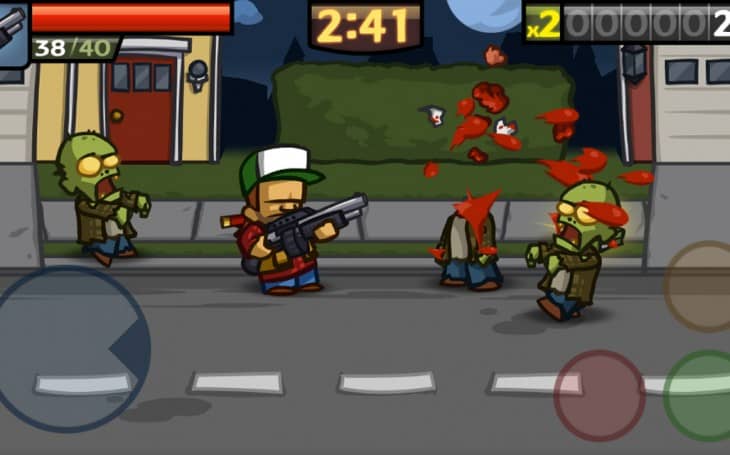 It’s been a long wait for the fans of shooting games before Zombieville USA 2 was released. Once you have added this game you can start to feel the atmosphere with hordes of zombies.The game comes with 9 different levels and the player has the liberty to move forward and backward. And once you land at a new level, you will see a new location or come into contact with a new kind of zombie. You can only access this transition as you kill a certain number of zombies.
Zombieville USA 2 gives you access to more weapons and zombies. If you are wondering how to play this wonderful arcade game, you have reached the right place.
First, add the game to your device.Make sure you have 1GB available space on your device to ensure zero lagging or auto shut-off.
You can start your journey from the head of the campaign map and move past every 2D level and reach the end of the way.
Your target is to kill the zombies and shoot the highest number of boxes. This will allow you to upgrade to better ammunition including guns.
Over time, as your killing spree shoots up, you will earn cash that can be used to buy a new character who will represent you. Basically, you will be able to take on a new role.
As you garner a stipulated amount of money, you can buy power-ups and more skills to end the zombies.
While the game comes with an incredibly easy control consisting of three buttons and a joystick for shooting the guns, you will definitely enjoy spending your leisure playing the game. Following the game’s release on iOS 9, some users complained of a sound issue. With the new update being launched this problem is mitigated by the developers and the bug issues are also fixed.
The new update of Zombieville USA 2 utilizes a new matching service with which you can connect and create a playroom within seconds. This way you will have a more stable means of slaughtering zombies with a partner. The best part of the game, according to many, is that there is no particular strategy following which you have to proceed in the game.
You have to choose your own approach, select your own weapons, and decide what and how to kill. You will notice that a number of weapons in the Zombieville USA 2 give varying levels of knockbacks or may lead to unwanted impact on the undead. And that’s the reason you have to strategize accordingly. So what are you waiting for? Enjoy this game today!